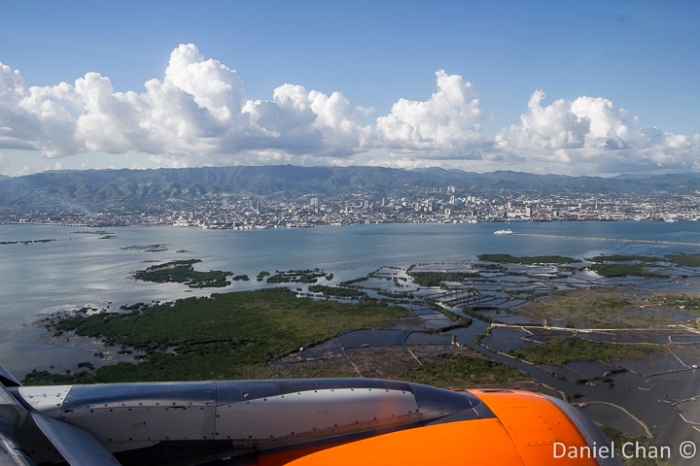 I am typing this whilst flying thru 25,000 feet in the sky flying for Kuala Lumpur to Singapore. I popped open my Nexus 7 and Apple Bluetooth keyboard and started typing. This is about a trip I took in December for some good de-stressing.

Chasing320 would like to credit Dwight Delgado for his insights, recommendations and traveller tips.

It was a busy year end of 2013 for me. Work has been a steady increase of class and I have been handling the pressure well but as with all work, there is a need to relax and have some fun.

Sourcing the various destination available, we had to squeeze in an okay budget as well as go to a location that we have not been to before. There was a suggestion that I head back to Phuket or Bangkok. I wanted some clean beach getaway. we chanced upon AirAsia’s partnership with Zest Airlines to fly from Kuala Lumpur to Cebu. Due to the new route launch, there was a promotional fare to  Cebu, Philippines.

As usual, for the cheap flights, the timings for the flights are weird but to save costs, we decided to opt for them. For RM122 per person return, it was a steal for me.
No doubt it only allows us a limited time but the savings is doubled. I just wanted to satisfy my wanderlust for the quarter as well as to see a new place and get a beach like vacation.

There was still a month plus to plan for the trip and the usual bookings of hotels and checking out tours were done whilst at work. Best Western Sand Bar Cebu was chosen. We were to head to Nalusuan island for a day trip. 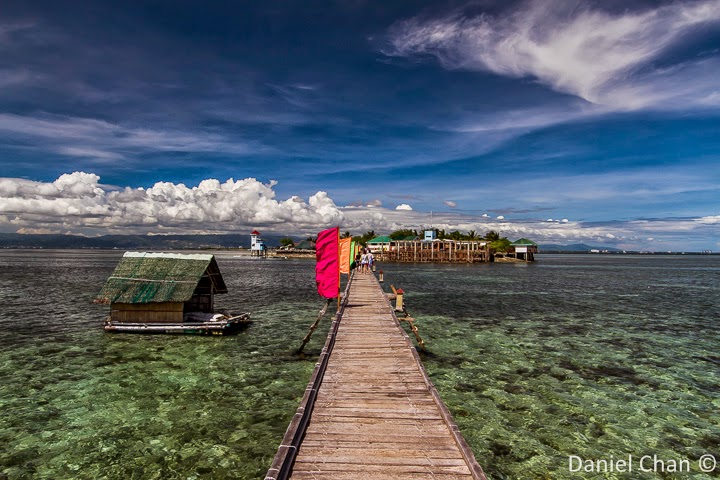 This trip was well planned due to the fact that I had a few Filipino colleagues who recommended some locations and foods for us.

The usual trip to KLIA has become a common thing for me. I am in the sky at least 8 times a month. 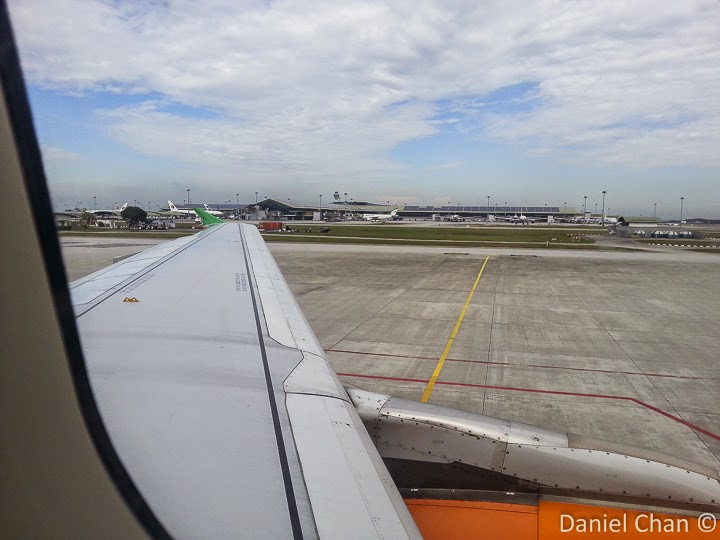 Cabin crew be seated for take off.

The flight from Kuala Lumpur to Cebu took us across the South China Sea. Flying above the Riau Islands, I decided to takes some photographs of this group of islands who belong to Indonesia though it is nearer to Malaysia.

The few times that I had flown across to East Malaysia, I had always seen this group of islands but never knew where they were until now.

The Zest Air plane was an A320 that was configured way better than most A320. You can see the huge leg space.

This plane was probably fitted before the budget flying of the past decade. You get so much leg room.

The flight was pretty empty. It was not common for Malaysians to be adventurous like me and head to an unknown place like Cebu.

The flight to Cebu was uneventful. A total of 4 hours passed by on this very empty flight. I counted a total of about 20 passengers on this flight. The food was not very good. It seems that the Zest Plane we took had the catering done in Cebu and all I got was mediocre food that was not up to par to be called AirAsia food. I must let you all know that AirAsia in-flight meals are pretty good but this was not the case. Well, food is food to fill an empty hungry stomach. So it was better than nothing.

The west end of Cebu. Here is probably where you go and see whales. 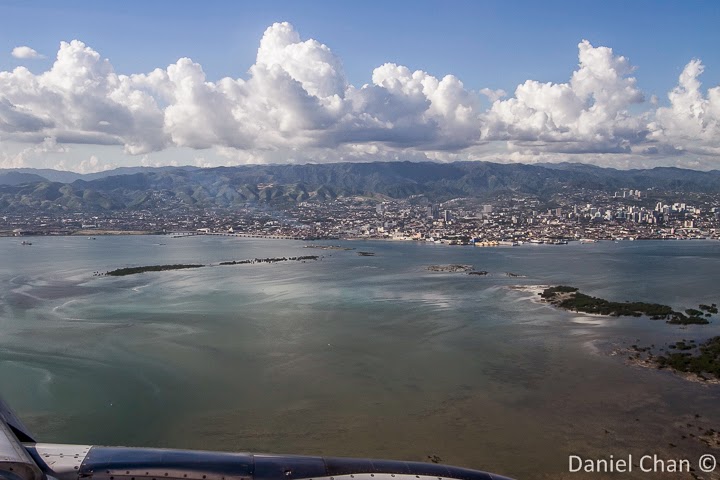 As we were descending into Cebu, we can see the mountainous range that is Cebu Island. The water was clean and as we flew over land, we can see the various small man-made pools for rearing fish. 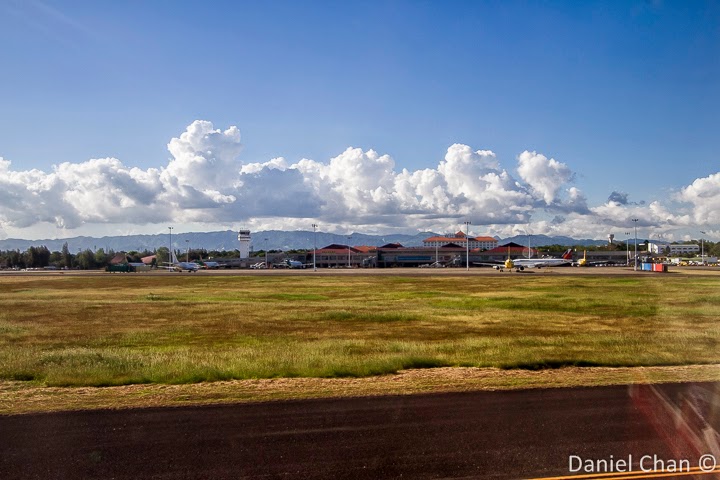 We touched down and slowly taxied to the terminal.

Cebu’s first impression was good. I had done some research on Cebu and hoped the culture shock would not be too great. The normal rules of thumb apply when travelling.

We exited the simple and functional terminal of Cebu International Airport. We walked a bit before calling our taxi driver who was apparently late. Late is good. Better than not turning up at all.

Past the airport compound, we went thru Cebu city. It was a mixture of Bangkok and Indonesia. It felt like the 80s and thru the heat and traffic of Cebu. 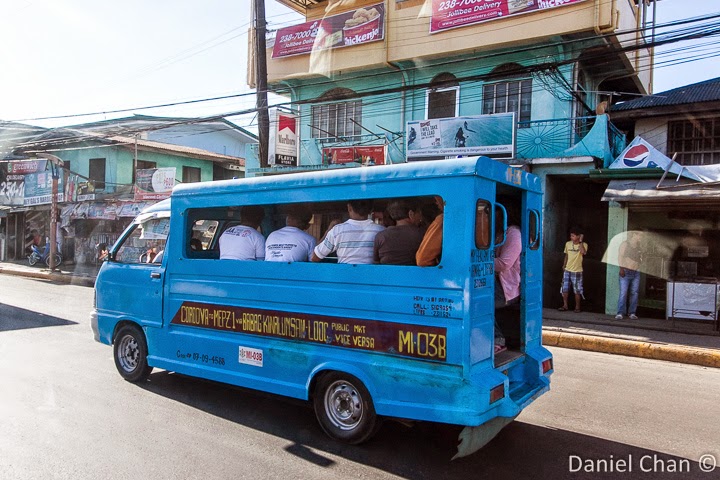 Thru a small road, we arrived at Sand Bar Resort.

We were greeted by friendly smiles and ushered to the check in. Though it was a short journey, I was actually quite tired. It was probably due to the work burnout.