It was Monday. My friend, Chen, had to go to work and left me to my own ideas.  He asked me to sleep in as Hong Kong only starts the day at around 11am. I decided to take his advice and stay in a little bit in his cozy studio apartment. It was just only 9am. The day before, we had gone up to Victoria Peak but due to low clouds, we were not able to get the iconic shot of Hong Kong at night. It was my mission to ensure today would be the day. It had rained in the night. As I lazed on the sofa-bed, I could hear the peace and quiet of a city slowly waking up.

Today’s plan was to go across the harbor and head for Mong Kok on the Kowloon side of Hong Kong. I left at 10am. It was not easy to get me to sit around and do nothing. I headed for the Hong Kong Metro or MTR has they call it. Having been to probably the most confusing Metro systems in the world in Paris, the Hong Kong MTR was something I should not have problems with. That did not stop me from getting on the wrong direction. I had to backtrack and soon, was on my way to Mong Kok via Central. I had to decide between taking the ferries across the harbor or to just take the trains. I decided on continuing on the MTR and was soon greeted by the popular signboards of Hong Kong.

For the next few hours, I roamed the streets of Mong Kok, known for electronic shops and compressed signboards. 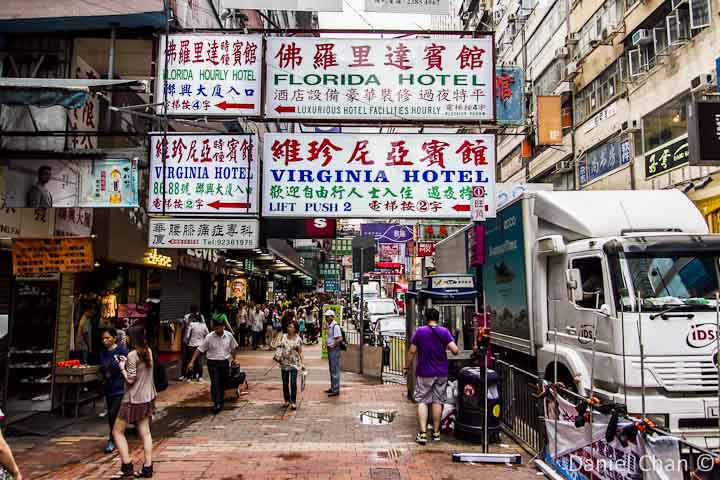 A very unique display. It seems the Asians have always been able to arrange signboards in a manner that fascinates. 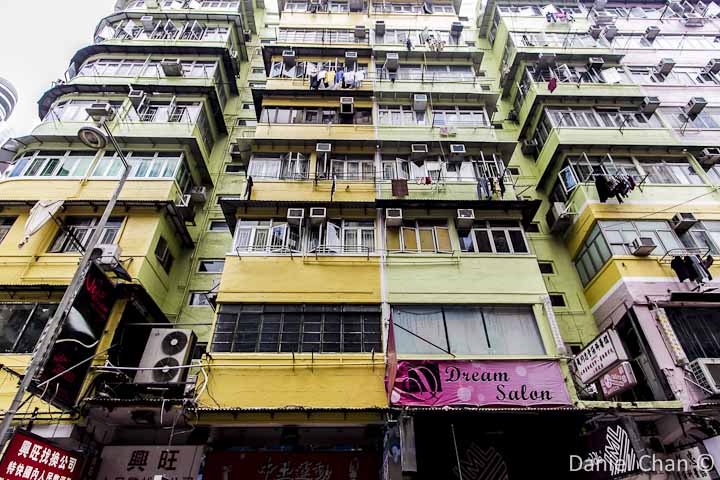 One of the icons, of Hong Kong. The compressed flats.

A worker strengthens the ropes on the bamboo scaffolding.

This area is packed with cheap hotels. Many offering hourly rates. I would not want to hole up here during my travels.

There are plenty of items to buy. Ladies’ market is a place where you probably can buy anything you require. From electronics to sex toys, to lingerie to baby toys, you name it, this market has it.  I had arrived much too early for the market to start up. Chen’s advice was ringing in my ears. Most shops were just setting up but this road was already closed off and “spots” already set up for partitioning of stalls. I believe this place never allows cars thru the road.

One of the shops to be opened so early. Selling bags.

The long walk from Mong Kok to Tsim Sha Tsui

A lot of people ask why I would waste the time to take a walk rather than take a cab to the next destination. I can’t really answer them that. I know the next destination has its own attractions and I would be able to spend more time to look at those places. However, if you take the walk, you spend more time seeing things that tourist miss. I guess that is what makes a difference between a tourist and a traveler  One sees the tourist spots, one travels between the tourist spots and sees more.

It was already 12 when I started my walk from Mong Kok to Tsim Sha Tsui. I was going to pass by the large malls that line the streets from Nathan’s Road all the was to the Salisbury Road. I would be able to pass by Kowloon park on my way and take in the greenery of the park. We live in a concrete jungle of this Hong Kong. It is nice to get a real green jungle for a change.  The streets have started to pack with people starting up their day. Lunch time was around the corner and a lot of people were starting their lunch hunt. For me, as I often end up doing on my travels, I skip my meals. I drank some water and kept walking. 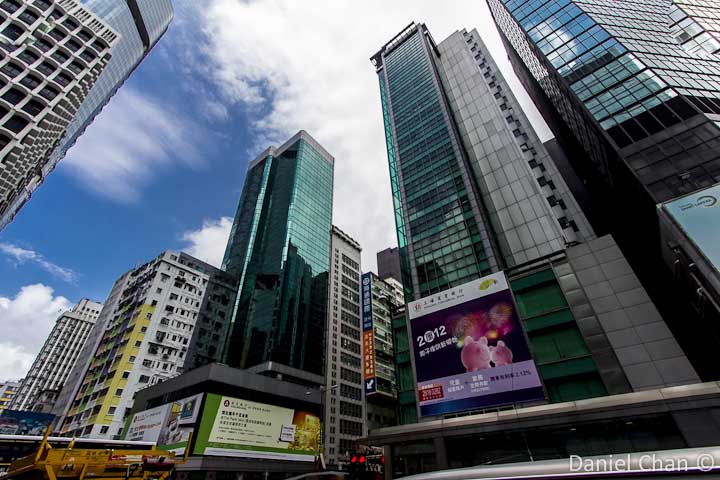 After yesterday’s overcast skies, it was nice to get some blue skies today. 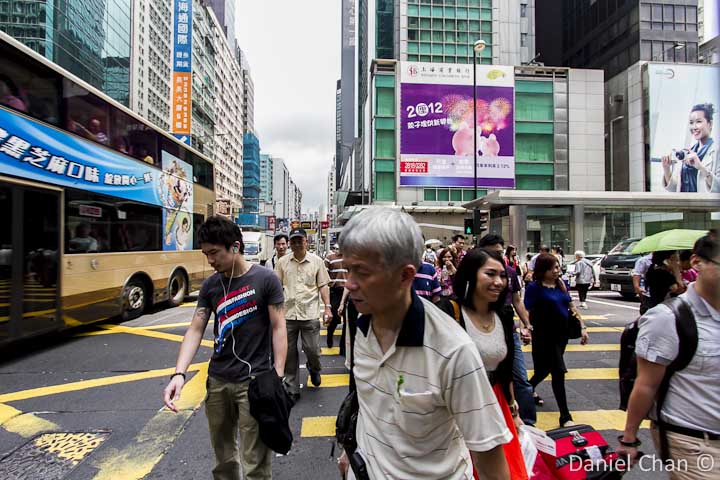 I had walked two station’s distance. This was taken at Yau Ma Tei. People had started to flock the streets to start work or look for lunch.

A fountain in a pond at Kowloon Park. Refreshing change.

A man sits in the park, deep in thought as I walked by and stole a photograph of him.

After an hour of walking, I had reached Salisbury Road. A few more hundred meters and the Victoria Harbour would greet me. It was just only in the last evening, I was hear capturing the night show of the Hong Kong skyline. I took a few photos that were common for travelers in Hong Kong. 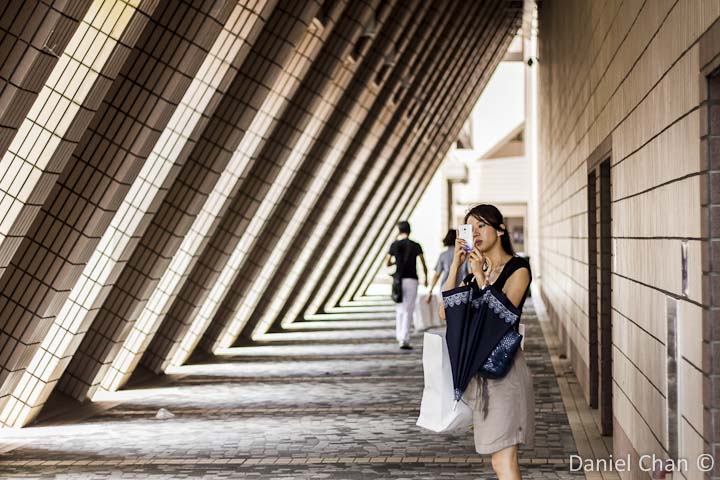 A lady takes a photo of the iconic walls of the Hong Kong Cultural Centre. 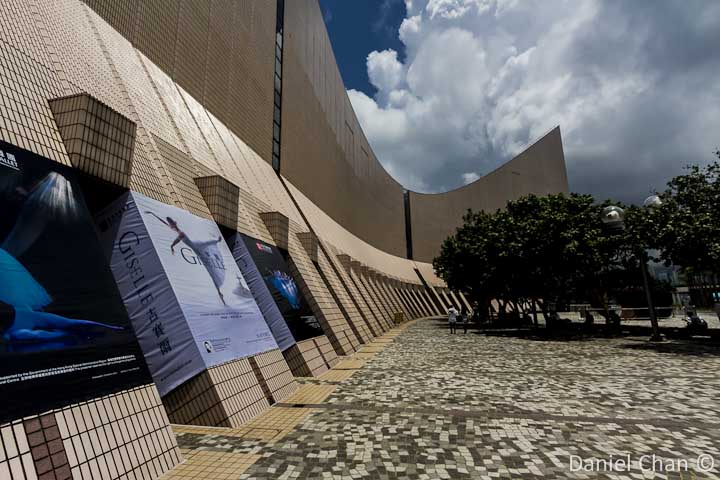 The weather was still overcast today. This is the Hong Kong skyline on an overcast day. I guess I need to buy postcards for blue skies.

I took the ferry ride across the harbor. The day was getting hot and I had been drenched in my own sweat. The ferry ride took no more than 5 minutes as I crossed Victoria Harbour. Thousands of people use this method to get between Hong Kong Island and Kowloon.

This is the view you would get from the ferry crossing back to Hong Kong Island.

By this time, it was already 130pm. I was starting to get a bit hungry and it was time to head to Central. I had to explore Central before heading up to Victoria Peak. Lunch was on my agenda and I walked the streets and hills of Central in search of food. 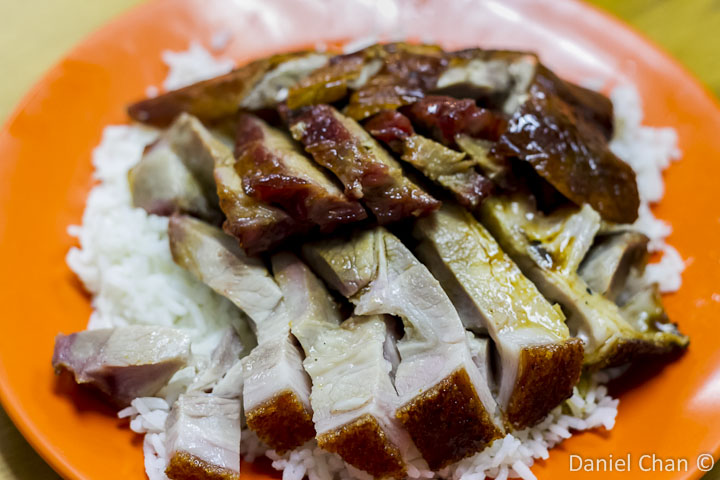 This turned out to be one of the best meals I had. Roasted goose, Roasted Pork and Char Siew. HKD 45 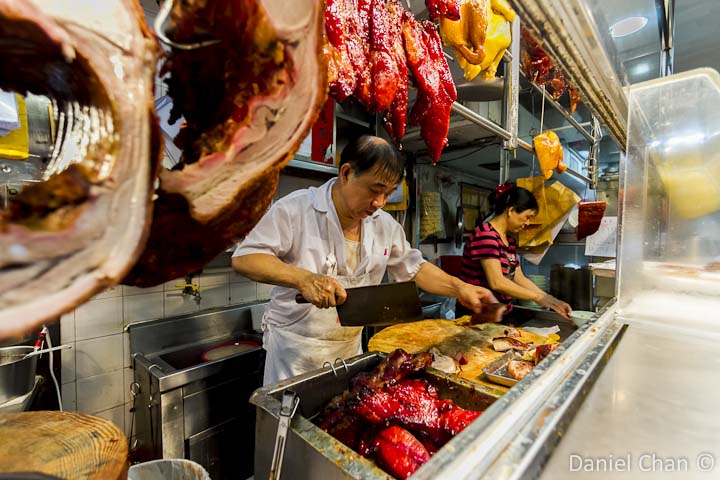 Meat cutting or carving is a skill.

Those who know me, know that I am not a fan of Anthony Bourdain. Just for some reasons, I disagree with some of his recommendations. Not all but some, especially when it came to Chinese Asian food. So I was walking along and my stomach was telling me it was time to feast. I saw this shop and just stumbled in. I ordered my meal. You get a cup which you can refill with cheap Chinese tea for free. The meat is hung everywhere in the shop. Many would say this is unhygienic but for Chinese people, this was totally fine.  I come from a country that says : The Dirtier the Place, the better the food! The taste was perfect. I enjoyed every bite. The blend of herbs and oil was well mixed and the meat juicy but roasted to perfection. For HKD 45, I was not complaining. This was a good meal. As I exited the place, I looked at the walls and I saw an article in a magazine framed up. In it was dear Anthony Bourdain and this shop was one of his recommendations for Hong Kong food. Perhaps I shall give him credit. This was a good place.

After lunch, I wandered the streets of Central in the direction of Victoria Peak. 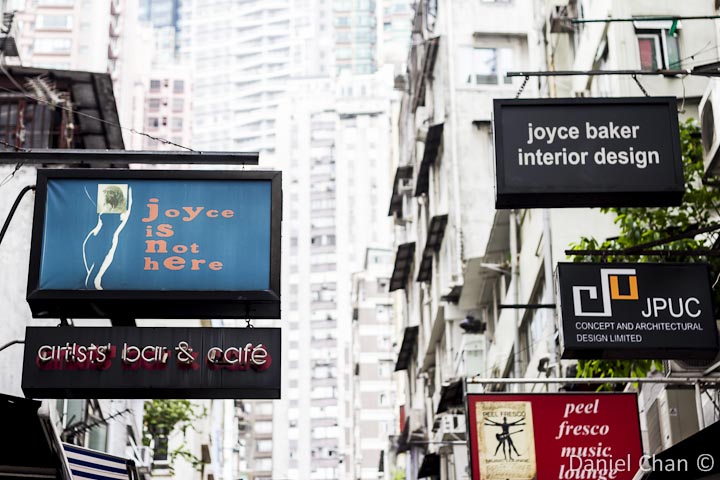 Where is Joyce? A nice play of signboards. 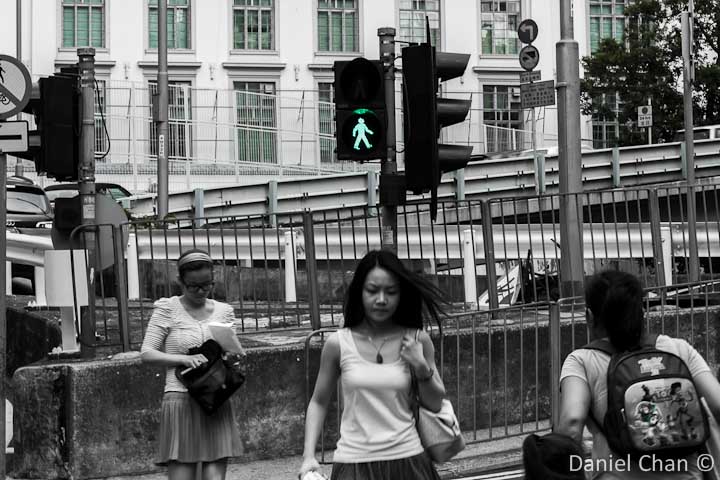 Cross only when the green may is lit.

Sales Wanted. I think every business wants this. This shop put up a sign. I am sure it was Salesperson wanted.

At 4pm, I took the bus up Victoria Peak. I had wanted to take The Peak Tram up but the line was too long and I was tired from the day’s walk. There were many hours left and I needed the energy. The bus takes about 30 minutes to reach the top. This narrow winding road will pass many bungalows and condos. At Victoria Peak, I sat and enjoyed the evening wind. The wind was coming in from the Pacific Ocean and it was a welcome to the humid and sweaty day I had.  I walked around taking photos and while the clouds did not lift much, it was better than the day before and I was able to get some photographs. 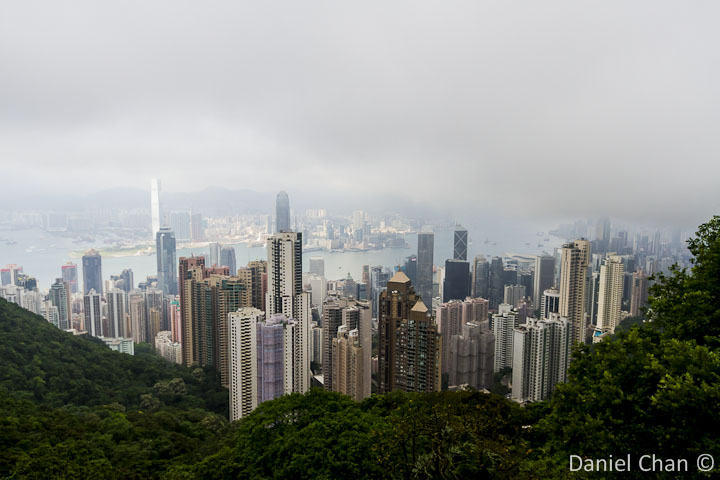 I had to wait a few hours for the dusk to arrive. I decided on getting some food. Mak’s Noodles was a popular recommendation as well. And yes, Anthony Bourdain’s picture is here as well.

For HKD35, this small bowl of noodles with dumpling can be yours. I would say this was on the saltier side.

I headed out after my meal and dusk was settling in. I quickly snapped some photos. 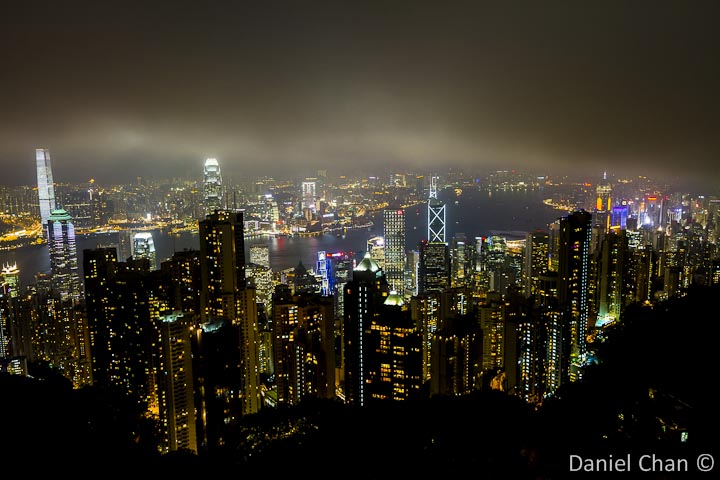 Chen and Francis had called me. I was to join the both of them for dinner. As my bus snaked down back to Central, I fell asleep due to the tiredness of the day. Dinner awaited and after that, some packing. My Hong Kong trip had come to an end.

Live It, Love It, Hong Kong. The song for the Hong Kong Tourism Board advertisement promoting Hong Kong as a tourist destination keeps playing in my mind when I think of Hong Kong. The power of advertising. I am glad to have finally seen Hong Kong as it is today. I do not remember much of my first steps in Hong Kong. It was just an evening in transit and a hotel stay before heading back to the airport. It was just a transit. This trip was a short one, much akin to my younger years but I managed to stay a few days, see a few sights and tasted a few dishes. I was contented with my short Hong Kong trip.

Day 3 was just a cab to Central, a train to the Airport and a plane back to Singapore.  Hong Kong is a bustling city. The food is a bit on the saltier side but unique in it’s own ways. Dishes here are mainly Cantonese and though there is a lot of English signs, you will need to know Cantonese to converse. The humidity is very high and it is easy to work up a sweat. Hong Kong is pretty safe and walking the streets alone was not an issue. I have to thank Chen for his hospitality on this trip for offering his place for me to bunk.

The things I did not have the chance to try : Hong Kong Disneyland, Dim Sum and….probably next time.